Confidence (and The Speech) is not the play you think it is, but it is the play we need right now. 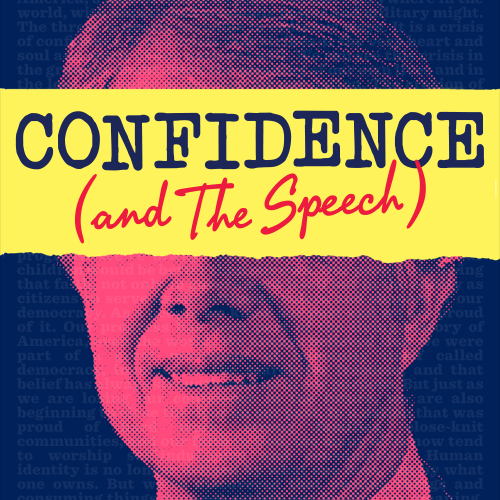 On July 4, 1979 President Carter cancelled an important energy policy speech he was scheduled to give the next day and disappeared to Camp David. Ten days later, he emerged from his impromptu domestic summit and gave a new speech, the Crisis of Confidence speech, which became known as the “malaise” speech. The speech garnered overwhelmingly positive responses at first and many now view the speech as unprecedented, farsighted and insightful. Others think it may have ultimately cost him the White House.

Forty years later, college professor Cynthia Cooper is approached by a stranger, a young man, and asked to recall her time with the Carter Administration during the days before the now infamous Crisis of Confidence speech. If she is going to tell her story of that time – the story told from her perspective – she is going to play the President. And the young man who wants to know her story? Well, he is going to play her. This unique cross-gender play explores the confidence of a president, a nation in chaos and women in politics.

‘Confidence’ asks us to look at gender, power and presidential politics (Charlotte Observer)